In the summer of 2020 a trailer began making the rounds online of a new film called de slag om de Schelde.
See the 2020 Trailer on YouTube.
See the 2021 Trailer on Facebook. 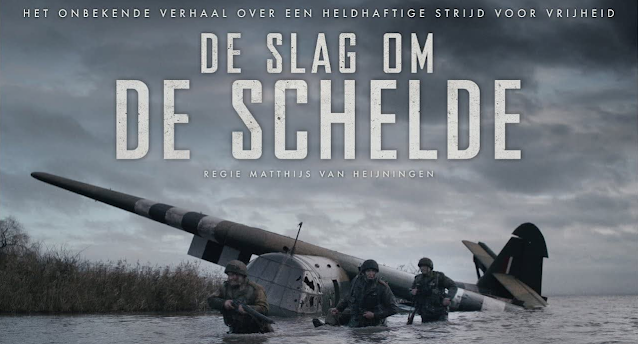 Fans of Canadian military history had reason to be excited. In English, of course, the title is "Battle of the Scheldt" and refers to a major campaign of the Second World War, fought in the Netherlands in the autumn of 1944, with major Canadian participation. The 1st Canadian Army had shaken free of Normandy and taken the left flank of all the Allied armies in Europe. It was a weighty responsibility, as there would eventually be just seven army headquarters on the Continent (1st Canadian, 2nd British, 1st US, 3rd US, 7th US, 9th US, and 1st French) divided into three Army Groups: the 21st (British-Canadian), the 12th (American) and the 6th (French-American). In strategic reserve was the 1st Allied Airborne Army with several divisions of parachute and glider troops under command.
The Long Left Flank, as Canadian historian Jeffery Williams called it, was not a backwater. Within the area of operations of 1st Canadian Army were a number of rocket sites from which flying bombs were hurled at the United Kingdom. There was an imperative to quickly destroy these sites, and it was not the only strategic imperative to Canadian operations. Having thoroughly smashed the German 15th Army in Normandy, the Allied armies advanced across northern France so fast that keeping them supplied quickly became a problem. The Germans showed an unwillingness to give up control of the ports along the Channel coast and many, like Dunkirk, remained in German hands until the end of the war. Others, like Le Havre and Calais, fell to the Canadians (and British formations under their command) only after hard fighting. This meant supplies had to be moved by truck over long distances, consuming gasoline and manpower as the French rail system had been thoroughly smashed by Allied bombing before D-Day. 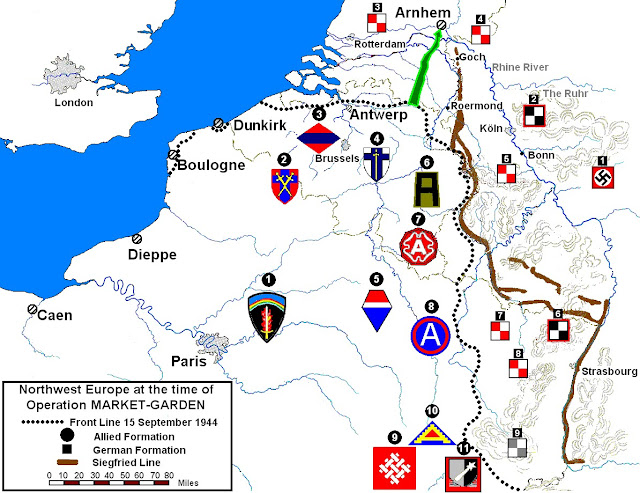 Battle of the Scheldt
The capture of Antwerp in August 1944, with port facilities intact, promised to solve the worsening supply crisis by providing a major port close to the front lines. The only problem was that the Germans controlled the Scheldt Estuary, the waterway leading from the North Sea into the port. Priority was not given to clearing the estuary, and instead the Allies gambled on Operation MARKET-GARDEN, an ambitious plan to forge a bridgehead over the Rhine River at Arnhem and endanger the German industrial heartland, the Ruhr. The plan failed, and in late September, 1st Canadian Army was given the go-ahead to clear the Scheldt. 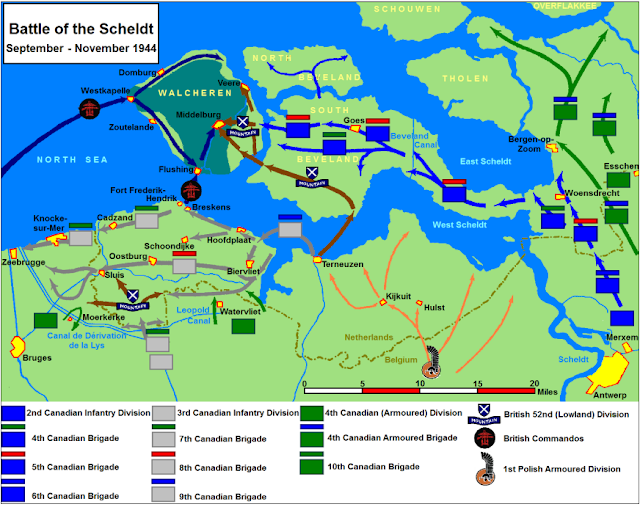 The battle lasted for over a month and was primarily a Canadian affair. The 3rd and 4th divisions fought south of the estuary to reduce the so-called Breskens Pocket while 2nd Canadian Division battered at the neck of the South Beveland Peninsula and then raced west towards Walcheren Island where German coastal batteries kept Allied shipping at bay. The Canadians weighed their options, decided not to use paratroops on Walcheren Island, and instead bombed the dikes, flooding much of the island instead. British commandos landed on the western side of the island while the Canadians approached from the east.
Walcheren Causeway
The only land link between Walcheren Island and the South Beveland Peninsula was the Walcheren Causeway. The Dutch referred to the feature as the Sloedam (literally, a dam across the Slooe Channel). The feature was a mile long and only 40 metres wide, carrying a rail line and hardened road linking the island to the isthmus. The occupying Germans had begun to heavily fortify the area in 1942 following the Dieppe Raid. There were a number of concrete bunkers and gun positions in the area by 1944, though most of them were sited to defend against an amphibious landing coming from the North Sea, not a land assault. The Germans did have some idea of how difficult an assault over the causeway from east to west would be, for they had done it themselves in 1940 during their initial invasion of the Netherlands. A unit of SS troops attempted an assault and took heavy losses from the French Army defenders. The causeway was devoid of cover, with just a single row of trees along its length.
The 5th Canadian Brigade approached the causeway on 30 October 1944. Both sides made their preparations. The Germans blew a large, deep crater on the causeway itself to prevent Canadian tanks from crossing. They emplaced machine guns in bunkers on the western end, and added a high-velocity gun for good measure able to fire straight down the road. A number of 20mm anti-aircraft guns were sited along the eastern shoreline of Walcheren Island able to fire onto the causeway itself. The Canadians, not sure of what they might be facing, planned to "bounce" the causeway with a rapid attack. One of the 5th Brigade's battalions had trained in the UK to use assault boats, expecting to need them to cross the Seine under fire. The Seine crossing never materialized, and now reconnaissance parties went out to see if they could make use of that training at Walcheren. They reported that the water and mud flats surrounding the causeway was too deep to ford and too shallow to take boats.
The Canadians were left with no choice but an assault over the Causeway. The first attack went in on the 31st in the form of a company of the Black Watch, which was turned back with heavy casualties. Their brigade-mates, the Calgary Highlanders, made a second attempt in darkness and similarly went only as far as the crater.
An extensive artillery fire plan was drawn up, and Major Bruce Mackenzie's "D" Company went forward on the morning of 1 November under heavy supporting fires, captured the far end, and established a bridgehead. For the better part of two days, the Calgary Highlanders fought off desperate counter-attacks, to be relieved by Le Régiment de Maisonneuve, who were in turn relieved by a battalion of Glasgow Highlanders. As they fought at the causeway, British commandos landed on Walcheren from the sea, with additional landings by the 52nd Lowland Division. The island fell after a few more days, the last act of the Battle of the Scheldt, but by then the Canadians had been relieved and shipped off to the Nijmegen Salient for a much needed rest.
Legacy of the Causeway Battle
The Calgary Highlanders decided after the Second World War that the battle at the causeway, in which 64 of their men had been killed or wounded, would be held in special esteem. Each year the regiment commemorates the battle, usually with representation by the local Dutch-Canadian community. For the regiment, it ranks as one of their most significant events in over a century of service.
Battle of the Scheldt on the Big Screen
The film, which had its Dutch premiere in 2020, is now coming to Netflix in North America on 15 October 2021 under the English language title THE FORGOTTEN BATTLE. Canadian military history enthusiasts can see much to like in the trailer, not least of which are the references to, and depictions of, the Battle of Walcheren Causeway. 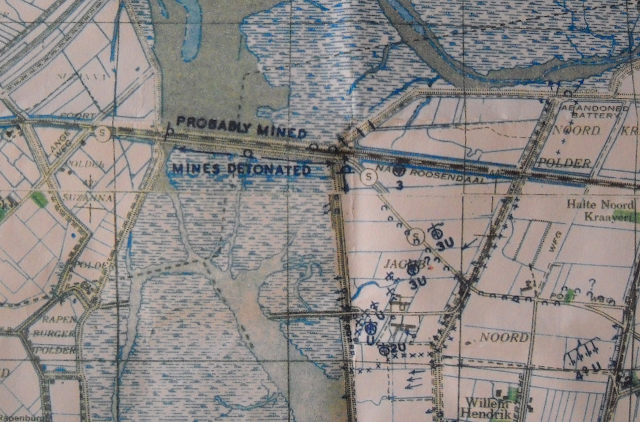 Based on screenshots and promotional stills, it appears at the least that The Black Watch (Royal Highland Regiment) of Canada will be represented. These images show the correct blue lozenge shoulder flashes and rectangular divisional patches of the 2nd Canadian Division.

Other details are the subject of discussion by keen-eyed observers, battle dress patterns and No. 1 Mk III rifles which were not in use at the time. Military enthusiasts have come to expect inaccuracies, minor and major, in uniforms, weapons and tactics in films so this is nothing new. And it should be noted the story revolves around three major characters, none of whom are Canadian. It would appear the Canadian battle scenes are backdrop to the story of the main protagonists: a German, a Dutch resistance fighter and a British glider pilot. 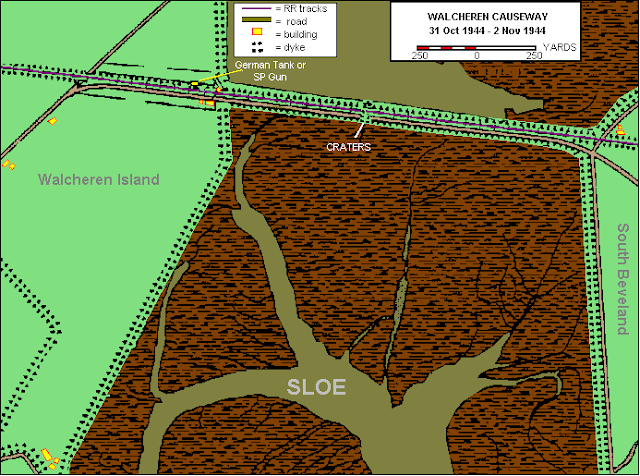 Walcheren Causeway Geography
The causeway no longer exists as such. The Dutch have continually "reclaimed" land from the sea, and this has been the case with the area separating Walcheren Island and South Beveland. The former Slooe Channel has been diked and is today used as farmland. A new highway has been built south of the former causeway. There are still German bunkers on the eastern edge of what used to be the Slooe Channel, and the former causeway today carries a high-speed rail line.

Conclusion
The Battle of Walcheren Causeway has great importance to the regiments that fought there (The Black Watch (Royal Highland Regiment) of Canada, The Calgary Highlanders, and Le Régiment de Maisonneuve, as well as 1st Battalion, Glasgow Highlanders of the British 52nd (Lowland) Division) but is largely unknown outside of military history circles. With little of the original battlefield surviving into the current day, it is exciting to think that the battle will be brought back into the public consciousness by this major motion picture.
Further Information
Netflix Is Co-Producing Dutch War Movie 'The Battle of the Scheldt' - Variety
The Forgotten Battle (2020) - Internet Movie Database (IMDb)
Radio Canada: The vicious battle for the Walcheren causeway – RCI
Posted by M.Dorosh at 6:45 PM