Aubrey Cosens was born to a First World War veteran in Latchford, Ontario, on the 21st of May 1921.

He moved at a young age to Porquis Junction, near Iroquois Falls, Ontario and was educated in the Porquis Junction School. In 1938, he left school 1938 to work on the railway with his father as a second hand. In 1939 he attempted to join the Royal Canadian Air Force but his application was rejected. In 1940, he went to Hamilton, Ontario and was enlisted in The Argyll and Sutherland Highlanders of Canada, with whom he served in Canada, Jamaica and England, eventually earning the rank of corporal.

In the summer of 1944 he transferred to the1st Battalion of The Queen's Own Rifles of Canada, serving in Europe with the 3rd Canadian Infantry Division, and was soon promoted to sergeant. Cosens was acting as the Platoon Sergeant of 16 Platoon during the action in which he earned the Victoria Cross.

His Victoria Cross is held by the Glenbow Museum in Calgary, Alberta.

Rifleman Don Chittenden of the Queen's Own Rifles served in Aubrey Cosens' platoon.  The following is taken from the February 1994 issue of Legion Magazine, and is in Rifleman Chittenden's own words.

It was still raining.  We had dug our slit trenches in the farmer's fields and were huddled in our gas capes, trying to keep as dry as possible.  We felt the February cold, too.  We had been huddled near a (German) hamlet called Mooshof for five hours.

We had marched along wet roads congested with all kinds of military equipment, some of which we had never seen at close range before.  We were part of an enormous assault that would erupt long before dawn.  All movement was aided by the artificial moonlight created by numerous searchlights in our front lines.

A terrific artillery barrage was unleashed, an enormous amount of metal going over our heads.  We wondered why we could actually see some of the stuff going over and speculated about tracer artillery shells.

I was a teenage rifleman in 16 Platoon...Sergeant Aubrey Cosens came frequently to each slit trench; I think he was trying to lift our spirits.  We were two men to a trench, but there was little talk.  There was too much on our minds, and we were wet and cold.  Most were probably too nervous to be hungry - not that we would get any food right then anyway.   When Cosens finally came to tell us that we were starting our assault in a few minutes, we got out of the trenches and started fussing with our equipment.  We took off our gas capes and rolled them up tightly.  My buddy and I helped each other strap gas capes to the centre of our web belts, in the small of our backs.  This kept the cape out of the way.  A rifleman wanted as low a profile as possible when he had to drive to the ground under sudden fire.

Every lad in our outfit agreed that the most important piece of equipment an infantryman had was his short, D-handled shovel.  We helped each other with these, too.  The handle had to be inserted through the cross-straps on our backs.

This time, I couldn't fasten my web belt because the rain had made it shrink a little.  The webbing was not designed for easy adjustment and my fingers were stiff from the cold.   This was complicated by the fact that some time earlier, in Nijmegen, our lieutenant had made me platoon runner.  I don't know why he did this, because he already had a runner.  But the lieutenant wanted me to carry his Very pistol all the time, and I had failed to properly adjust the web belt to carry the extra burden.

When Cosens came by again, he noted my difficulty and offered to help.  You can imagine the ridiculous scene: here was Cosens kneeling in the mud before me, trying to get my belt done up while all kinds of death-dealing metal flew overhead.  It was if I were a not-too-bright youngster who was late for Sunday school, and his mother was trying to get him presentable and on his way.  Looking down at the top of the sergeant's helmet I started to laugh.  I stuck my thumb in my mouth to complete the picture, and when Cosens looked up into my face he roared with laughter too.  It was a great tension-reliever.

As we were advancing roughly abreast towards the hamlet, I was with the lieutenant awhile, but later we were separated.  I was eventually on point, slightly to one side, a few yards past the hamlet and deep into enemy territory.  I came to a root pile, the type German and Dutch farmers built by laying two or three feet of straw on the ground, then pile on turnip-like vegetables in a large mound and covered the whole thing with more straw and then earth.  Their winters are milder than ours, and the cattle can munch on the root pile all winter, exposing the food as needed.

I came to a dead stop because there was a Jerry with a Spandau machine-gun on top of the pile.  Scared stiff, I finally realized that he hadn't chewed me up because he didn't want to risk his own life in killing just one rifleman and drawing my comrades' attention to himself.  I wasn't worth killing.  I started to walk slowly backwards, until we could no longer see each other.  The German probably left the root pile soon after I did, because I would surely tell the others about his location.

The the real hell broke loose.  A heavy enemy artillery barrage opened up while I was in the open, all alone and still a few yards past the hamlet.  I survived because of the accuracy of the German barrage; the barrage reached into the hamlet and killed many of my buddies, even those who were in the Jerry slit trenches.  I crawled to a small shell hole made earlier by one of our 25-pounders and was able to get my head and shoulders partly below ground.  I was hit by flying dirt and there was terrible noise and smell from the exploding shells, but I was unscratched by those landing a few yards away.

When the shelling stopped I walked towards the houses.  One comrade was lying in a shell hole and told me where his various shrapnel wounds were, bravely making no fuss.  We both knew that although he was in pain he would survive.  Meanwhile, the business of getting the Jerries out of the houses had to resume.

Halfway between two houses, I came upon the body of Corporal Fraser.  I was stunned, because I had shared a billet in Nijmegen with him.  He had liked the song You're So Dumb, But You're So Beautiful but didn't know the lyrics.  He'd sing the first line, then pause for about a second, and sing: "You're so (expletive) dumb it really hurts me."  Then we'd both laugh.   He must have done this a hundred times.

Fraser was now lying dead at my feet, and I was staring down at him.  Cosens dashed up beside me and said, "Chitt, you're going to get your ass shot off."  He gripped Fraser's collar and webbing and dragged his body toward the wall of one of the houses.  He already was thinking about the 1st Hussars tank in our area, and that he would enlist its help in silencing the Spandau machine-gun that had killed Fraser.  He didn't want Fraser's body crushed by the tank.

When he couldn't communicate with the commander of the tank because of the noise, poor light and because the tank commander in the turret could not expose himself in that high perch, Cosens raced across open ground and climbed up onto it in the midst of a hail of machine-gun fire.  There was tracer ammunition mixed in, so that two of us who shared a slit trench a few feet away could see bullets rattling off the tank as the Spandau gunner sprayed it.

Cosens got behind the turret and gained the attention of the tank commander, then pointed to where the machine-gun was at the moment. Two or three shells from the tank made the bricks and roof tiles fly, giving us instant relief.  One more German mother lost her son.

We found when we started house-cleaning a few minutes later that several Jerries were holed up in the cellar of one of the houses.   As we had taken a severe mauling, Wagner and I wanted to use grenades.  Cosens was on the other side of the front doorway with a rifleman, trying to talk us out of it.   He moved into plain sight in the improving light and started shouting to the Jerries to come out and give themselves up.  By thus exposing himself he was trying to gain their confidence.  It worked: we got 14 Jerries out of that house.

We had to dispose of these prisoners, so Cosens told a few of us to take them behind the lines.  It was the last time I saw Cosens alive.

With the platoon commander dead, and only four of his men still standing, Cosens managed to secure the objective and position the remnants of 16 Platoon for further action. While he was on his way back to the company commander to report his platoon's situation, a German sniper put a bullet into Cosen's brain.

In Holland on the night of 25th-26th February 1945, the 1st Battalion, The Queen's Own Rifles of Canada launched an attack on the hamlet of Mooshof, to capture ground which was considered essential for the development of future operations.

Sergeant Cosens' platoon, with two tanks in support, attacked enemy strong points in three farm buildings, but were twice beaten back by fanatical enemy resistance and then fiercely counter-attacked, during which time the platoon suffered heavy casualties and the platoon commander was killed.

Sergeant Cosens at once assumed command of the only other four survivors of his platoon, whom he placed in a position to give him covering fire, while he himself ran across open ground under heavy mortar and shell fire to the one remaining tank, where, regardless of the danger, he took up an exposed place in front of the turret and directed his fire.

After a further enemy counter-attack had been repulsed, Sergeant Cosens ordered the tank to attack the farm buildings, while the four survivors of his platoon followed in close support. After the tank had rammed the first building he entered it alone, killing several of the defenders and taking the rest prisoner.

Single-handed he then entered the second and third buildings, and personally killed or captured all the occupants, although under intense machine-gun and small arms fire.

Just after the successful reduction of these important enemy strong points, Sergeant Cosens was shot through the head by an enemy sniper and died almost instantly.

The outstanding gallantry, initiative and determined leadership of this brave N.C.O., who himself killed at least twenty of the enemy and took an equal number of prisoners, resulted in the capture of a position which was vital to the success of the future operations of the Brigade. 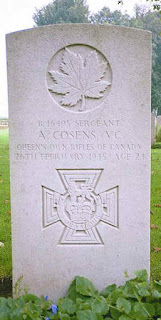