Sorting Out the Carnage: 100 Years Later

In 2010 I had the pleasure of accompanying a large delegation of soldiers, musicians, veterans and family members of my reserve unit to France, Flanders and the Netherlands to commemorate the 100th anniversary of the creation of The Calgary Highlanders. We spent two weeks visiting battlefields and a fair number of Canadian military cemeteries. One notable aspect of our visit was visiting a Calgary Highlander who was buried in 1944 and whose headstone incorrectly identified him as a soldier of The Black Watch (Royal Highland Regiment) of Canada.

The mix-up was perhaps understandable. On 25 July 1944, as part of Operation SPRING, the Black Watch put in an unsupported attack against the Verrières Ridge. It was the worst day of the war for the Black Watch and the worst single day for any Canadian infantry battalion after Dieppe. A total of 325 Black Watch men left the start line and after their gallant attack, something like 10 men were still alive and unwounded.

One can only imagine the chaos that must have ensued at the casualty clearing stations as the scale of the disaster made itself felt. The Calgary Highlanders, who served alongside the Black Watch in the 5th Canadian Brigade, had put in their own attack that day as well. In all the confusion, it was perhaps understandable that one of our soldiers was mixed up with those of the Black Watch. He was put in a temporary grave and then later reinterred in one of the many beautiful Canadian War Cemeteries that are maintained by the Commonwealth War Graves Commission. When research by the regimental museum discovered the headstone was incorrect, the matter was quickly rectified.

The enormity of loss in the two world wars comes into sharp focus when one discovers that we are still trying to sort out the mess even 100 years later.

I recently received an email from the United Kingdom, with a photograph:

My name is Chris Docherty, a former British soldier from Scotland. Whilst walking through a local cemetery in Port Glasgow, Scotland I stumbled across a commonwealth war grave, it was located far from the other war graves by some 200 metres.

The fallen soldiers name is 2004542 Private W. Hair of the 7th Battalion, Canadian Infantry.  The headstone does not say where and how he died, the date he died was the 1st March 1917 aged 37. I can only assume his name may have been William.

I would love to trace his living relatives if this was possible and to find out if they know the graves location.

I have attached a picture of the headstone but, you would not believe it’s location as it’s placed with the most awesome views over the river Clyde to the hills beyond.

Can you or anyone you know help me with this ? 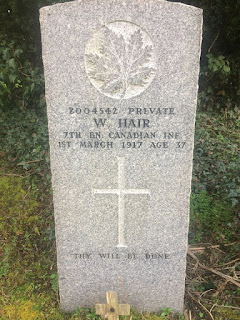 There are a number of tools available online to research with. I immediately looked up the soldier's attestation form, and found his entire service file had been digitized. It is available at this link 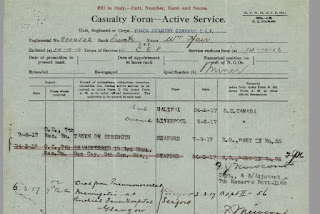 The file is not a happy one. It appears this gentleman arrived in the United Kingdom, went straight to hospital, and died of Meningitis. What struck my eye was his unit. While his headstone indicates 7th Battalion, Canadian Infantry, his service record indicates that he was with the 7th Reserve Battalion, which was a completely different unit.

His page on the Canadian Virtual War Memorial also incorrectly lists him as serving with the 7th Battalion, Canadian Infantry. A check with the good residents of the Facebook Society of Military Artifact Preservation, in particular the always helpful Mark Tonner, confirmed that the Book of Remembrance lists him as a soldier of the 7th Reserve Battalion. 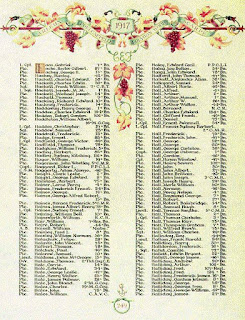 A quick note to the Commonwealth War Graves Commission produced a response within 24 hours:

Thank you for your email below.

Our Records section has now investigated this matter and confirmed that the correct unit text for Private Hair is the 7th (Reserve) Bn. As such they have amended our database and this should reflect on our website within the next 24 hours or so.

They have also placed an amendment request into our works programme to amend the Unit on the headstone from 7th Bn. Canadian Inf. to 7th Res. Bn. Canadian Inf. As this will require a replacement headstone I cannot give you an exact timescale as to its completion (normally anywhere between 18 and 24 months) but they have requested a photograph of the completed work which will be forwarded on to you once received.


As for the next of kin, while I don't have an interest in genealogy, from the available documentation online it looks like this unfortunate soldier had been buried just a few miles from his mother's home in Greenock, Scotland. If there can be any happy element of this story, it is that his family must surely have been aware of the location of his burial, and possessed the means to visit him as often as they wished.

Thanks to Chris, and the CWGC, his final resting place will soon be marked with the correct name of the unit he belonged to when he died.

In August 2017 I had the honour of serving on the burial party of a sergeant of the 10th Battalion who had been recently discovered near Arleux. His remains had been dug up during the construction of new housing. Because he had privately purchased a set of metal identification tags, his ID was confirmed. He had been killed there shortly after the Battle of Vimy Ridge, and his name appears on the Vimy Monument among over 11,000 Canadian soldiers who were listed as "missing" and presumed dead. The government was unable to locate any living relatives, and so a regimental delegation of The Calgary Highlanders served as witnesses to his proper burial, over 100 years after he died. 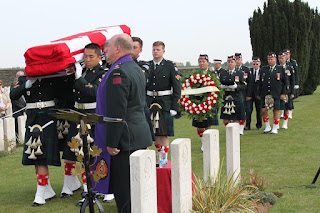 Sobering reminders, a century on, of how vast and terrible these conflicts were, in which men were killed in such numbers it was difficult to keep track of them all.

Less than an hour after posting this blog entry, one of the collectors at the Facebook Society of Military Preservation mentioned above indicated that he was in possession of the Memorial Cross sent to the family of Private William Hair 100 years ago. Small world. 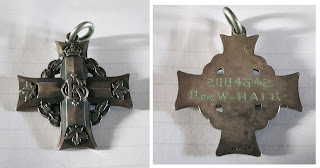