Military enthusiasts have long become used to the conventions of cinematic treatments of modern warfare (tropes, if you will). If the story is well told, the tropes are accepted as a necessary means of getting the story to the screen and into the public consciousness. Band of Brothers comes to mind. Others, just as well meaning, come off simply as more formulaic. The fictionalized Memphis Belle, for example, packed in so many vignettes of aerial combat that surviving heavy bomber crews noted that more happened in 90 minutes of screen time than any of them had encountered in entire combat tours over Europe.

Nonetheless, modern directors have turned their backs on the epic war films of the 1960s and 70s which told widely focused stories of massive scope, and instead have brought their cameras into the mud to tell much more personal tales. One reviewer said of 2017's Dunkirk: "That was one of the things most appreciated about (it) — that it felt more like an experience than an actual story."

The film features just two protagonists, in a one-shot format intended to personalize the story even further. Steven Spielberg had explained in 1999 that he avoided crane shots and flyovers on the set of Saving Private Ryan because he wanted it to look like the cameraman was actually on Omaha Beach with the actors. Sam Mendes has gone one further by making the entire film appear to be a single camera affair, shot in real time.

The publicity around this style of filming is probably more of a distraction than an attraction. This author didn't even realize Birdman was shot in the same manner until he read the reviews after seeing the film. During my viewing of 1917, I found myself looking for the places that the filming would have been interrupted. Some are easy to spot, if one is looking for them, and if it hadn't been for the publicity, I wouldn't have been looking for them.

Nonetheless, the acting, special effects, and yes, camera work, all have combined to do something quite special, at least for the first part of the movie. The hazardous journey of the two principals through No Man's Land is full of subtle details that will encourage repeat viewings. The details paint a rich tapestry of what life on the Western Front must have been like, in ways that are more convincing than anything committed to film before. The camera doesn't linger on the bodies, the rats, or the carrion birds, the way it does in other films like Legends of the Fall, demanding the viewer take note of how terrible it all was. In 1917, the dead, decaying bodies are a part of the landscape as natural as the trees, and the director trusts the viewer to come to their own conclusions about how to feel about what they are seeing.

Military enthusiasts (I am one) began their chatter about the verisimilitude of the film as soon as the first trailer was released. For my part, I zeroed in on what looked like modern weapon carries. (Yes, people really do dwell on this kind of thing.) On actually viewing the film, I'm less inclined to feel the military advisors have led the actors at all astray. One or two scenes may or may not be consistent with period weapons handling practices, but the overall look and feel of the film is so hyper-accurate that one easily dismisses it and gives the actors the benefit of the doubt. 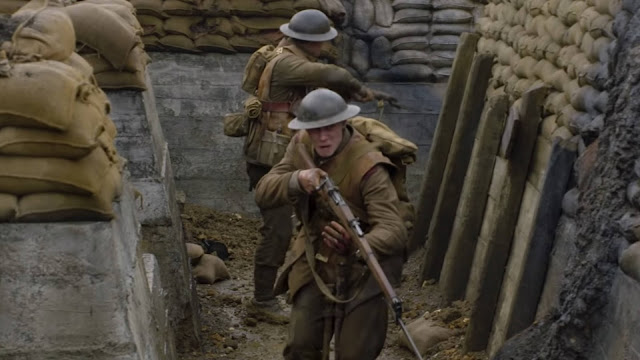 Harder to swallow, perhaps, is the plot line itself, at least in military social media groups that I have perused. It gives away nothing to say (as the trailers do) that the two principals have been charged with getting an important message through to a battalion cut off from its chain of command. (For those wondering, yes, the inability to just pick up a field telephone is lampshaded in the film by reference to cut cables.)

But of course, without the need to send these two characters into No Man's Land, there would be no story.

But is the story really so far fetched?

Those familiar with the actions of Private Harry Brown of Canada's 10th Battalion might not think so. 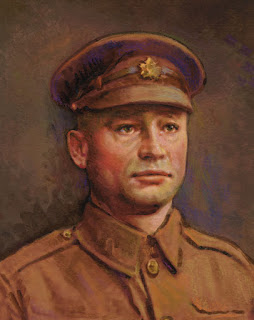 
In August 1917 (four months after the events of the film), Brown was ordered, with a comrade, to carry a message between an incommunicado company and headquarters. The use of runners was common in the First World War (and even with the advent of reliable radio communications, in the Second World War as well). The most famous runner of them all, of course, was Gefreiter Adolf Hitler of the 16th Bavarian Reserve Regiment. He was awarded the Iron Cross 1st Class for his service.

His citation reveals some other similarities to the characters in 1917:


For most conspicuous bravery, courage and devotion to duty. After the capture of a position, the enemy massed in force and counter-attacked. The situation became very critical, all wires being cut. It was of the utmost importance to get word back to Headquarters. This soldier and one other were given the message with orders to deliver the same at all costs. The other messenger was killed. Private Brown had his arm shattered but continued on through an intense barrage until he arrived at the close support lines and found an officer. He was so spent that he fell down the dug-out steps, but retained consciousness long enough to hand over his message, saying ' Important message.' He then became unconscious and died in the dressing station a few hours later. His devotion to duty was of the highest possible degree imaginable, and his successful delivery of the message undoubtedly saved the loss of the position for the time and prevented many casualties.


In other words, the story of two messengers being tasked to carry a message back because of cut wires is not at all far-fetched. Though in Brown's case, the second runner was insurance to guarantee the message got through (they would have been ordered to take different routes to maximize their chances of success).

Other elements of the story are perhaps better accepted for artistic license, though many of the small details ring true. In no particular order:

No doubt the military enthusiast will find much in the way of details large and small to find fault with, but more importantly the film delivers a solid cinematic experience. I was struck by how little the trailers gave away of important plot occurrences (rare enough, these days). And even if one is pulled out of the story completely by an unwillingness to suspend disbelief at the way the story unwinds in its last 30 minutes, with the usual descent into symbolism that dooms many First World War films (the crucifixion scene of Passchendaele comes to mind), that first scamper through No Man's Land has to be seen on the big screen to be fully appreciated, possibly more than once.

No love stories here, nor Hollywood heroics, just a glimpse into what it must have been like that complements Peter Jackson's documentary very nicely and brings to life a now dead generation in an equally moving, yet surprisingly fresh, way.
Posted by M.Dorosh at 1:57 PM No comments: